At the entryway to the exhibition, you are greeted by a zelkova tree, which is part of artist Jungki Beak's Akhaedokdan. This tree plays a certain role linking inside and outside of the gallery. Beak's artist talk is the first event of the ARTSPECTRUM artists programs organized as a bridge for viewers to come closer to the artists' works. He will give a talk about Akhaedokdan and also his broader practices.

"I believe making an effort and sincerity is a matter of attitude. Having “it’s just the way life is” kind of attitude ultimately does not change anything."

Challenging any binary opposition, Jungki Beak makes his questions actualities through performative actions rather than conceptualization. He mediates between art and science, mysticism and science, east and west, spirit and matter, and humans and nature, by creating new relationships between them, which solidifies his belief in the power of art. His artist talk will touch on the research process for Akhaedokdan as well as his artistic journey how his consistent research themes are turned into something fulfilling an actual function. 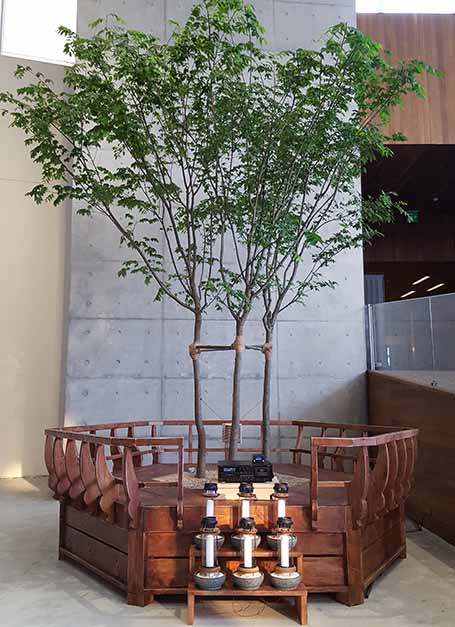 Jungki Beak further develops the theme of his Pray for Rain projects where he likens the divided society to a cracked and arid land in dire need of rain. In his new works, Beak employs the specific historical context surrounding the Akhaedokdan, a forgotten rain altar in Seoul. At the entrance to the special exhibition galleries stands a zelkova tree, erected on a hexagonal pavilion like a guardian. The number six represents water in the theories of Yin-Yang and the Five Elements, hence the shape of the pavilion and the six candles. The candles also symbolize earnest prayer, together with the rice, which signifies offerings for gods. The candles’ abstract energy of prayer is turned into electricity through a device that converts heat energy into electricity, which, in turn, powers a radio transmitter. The transmitter is connected to the zelkova tree, which acts as a living antenna and transmits radio signals to broadcast a conversation on the historical significance of Akhaedokdan between the artist and a scholar. The work shows Beak’s interest in negotiating mystical acts and scientific phenomena and tearing down the boundary between the mind and the material.


* This program is conducted in Korean only.
* Some of the details are subject to change.
* If you have a query about booking for this program, please contact us at service.leeum@samsung.com or phone 02-2014-6655.