Summer Film Screenings
Across documentaries and media art, Kelvin Kyung Kun Park deals with social issues such as modernization, industrialization and collectivism in Korea. Matters underneath the society are expressed by material immediacy and corporality in his work, which catches the eyes and ears of audiences in the museum and in the cinema alike. Prior to Army: 600,000 Portraits shown in ARTSPECTRUM 2016, what brought Park international recognition is A Dream of Aron(2014). The screening of this film will take place, followed by a conversation between Park and art critic Hye-jin Moon. 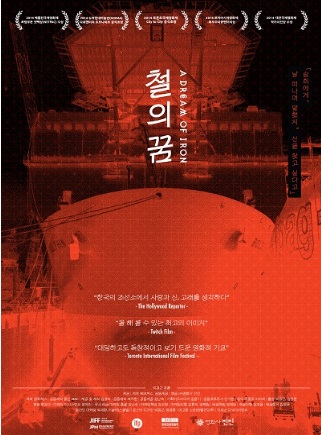 A love story comes to an end when a woman sets out in search of a shamanic god. Kelvin Kyung Kun Park takes the trauma of a spurned lover as the starting point for his own search for a god. He makes several finds across various narrative strands ? among whales in the sea, in a shipyard, at a steelworks. All of them are giants of their respective times: vast, sublime, godlike. Park's imagery also evokes the divine: embers and steel, sparks and fire; people dwarfed by huge cogwheels, robbed of their individuality. A brave new world in which workers produce modern industrial goods, even as industry has long since been producing the modern worker. Work is a god we have submitted to. Yet every existence is temporary and fleeting, which applies in equal measure to both relationships and gods. A Dream of Iron carries a unique signature. Park weaves together his different narrative strands into a complex documentary work of shamans and propellers, whales and industrial halls. His editing suite comes to resemble a piece of welding equipment, the soundtrack a commanding symphony of industrial noise, whale song, Gustav Mahler and shamanic songs.

Hye-jin Moon is an art critic. She studied material engineering in KAIST and art theory & history in K'ARTS. Her research interest consist in formal characteristics of technological media such as photography, video and new media, transdisciplinarity of artistic genres and academic fields, as well as contemporary art of Korea. She teaches at K'ARTS. Among her publications are Korean Art and Postmodernism in the 1990s: Tracing the Beginning of Contemporary Art(2015), and she also translated Themes of Contemporary Art: Visual Art after 1980(Craig McDaniel & Jean Robertson, 2011) and Photography: A Critical Introduction(Liz Wells, ed., 2016).

Kelvin Kyung Kun Park has examined characteristic aspects of Korean modern history starting from the Japanese occupation through modernization and industrialization, up to the present in his videos. In the new work titled Army: 600,000 Portraits, he explores the relationship between individual and collective through military service, a rite of passage that most Korean men share. He captures the elements of performance, emphasis on the body and sexual tension specific to the military in an aloof yet observant gaze. The film leads one to consider the so-called "army culture" and the extent of its influence on Korean society in general.


* The post-screening conversation is conducted in Korean only.
* Some of the details are subject to change.
* If you have a query about booking for this program, please contact us at service.leeum@samsung.com or phone 02-2014-6655.