Summer Film Screenings
Paldogangsan (The Land of Korea, 1967) gave Dong-il An inspiration for his painting Our Land of Korea. The film was made by the National Film Production Center of Korea, and it was the first of the series. Portraying the attractions across the country combined with scenes of economic development in the Park Chung Hee regime, Paldogangsan was assessed as successful propaganda, and it was also a box office hit. What makes the film interesting today 50 years after the film was made? After the film screening, artist Dong-il An and critic Daebum Lee will talk about the relationship between the film and An's painting.

Paldogangsan (The Land of Korea)

- Summary: An old couple who has a son and six daughters launch a journey to visit them around the nation as the seven children live throughout the country. During the nation-wide travel, they witness the modernization of Korea and feel satisfied with the children contributing to the national modernization directly or indirectly. 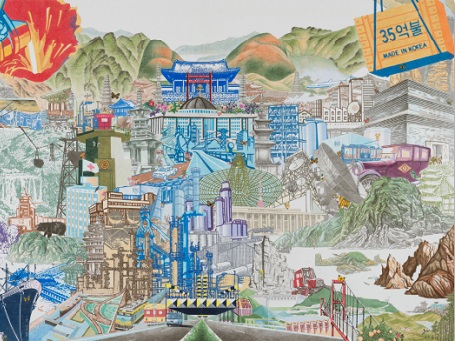 Dong-il An goes back in time to the 1960s and 70s, the time when his now deceased father spent his youth.Our Land of Korea, which contains iconic images culled from selected commemorative stamps issued around the same time period. Here, An effectively paints a portrait of an era by aggregating things that the era commemorated.

* This program is conducted in Korean only.

* Some of the details are subject to change.

* If you have a query about booking for this program, please contact us at service.leeum@samsung.com or phone 02-2014-6655.

□ There are also a range of other programs In conjunction with ARTSPECTRUM 2016 during the exhibition. For the full programs of ARTSPECTRUM [χ], see here.