Unfolding her continuous interest in illusion, a fabricated fantasy, by means of metamedia-like languages, Minha Park presents 24-min video Remixing Timespace and installation Tomorrowland in ARTSPECTRUM 2016. Ivan Carames Bohigas who composed music for Remixing Timespace will join Park for this lecture performance. The two artists will summon footage and sound dormant somewhere in an external hard disk drive, and data in the Internet universe through their live performance, talking about a history of the fantasy about stars and its circulating temporality. 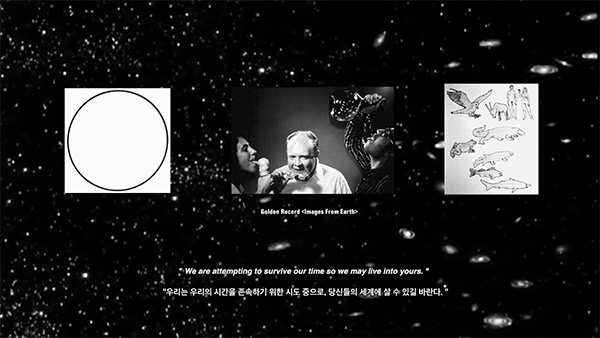 
"Spaceship Earth floats in the universe, and we are its passengers."

The term 'Spaceship Earth' first coined in the 19th century was later quoted by George Orwell, and then was materialized in the enormous geodesic dome of E.P.C.O.T(Tomorrowland), a failed utopian city by Walt Disney. The attempts to transcend the limits of Earth's spatiotemporality, which was the context of life of humanity for long, led to ritualistic economy of space development. What is on view in Remixing Timespace, such as E.P.C.O.T's Spaceship Earth structure, NASA's launch platform for an expedition of the Moon, and Space X's sites of Mars exploration are all places where these efforts were made. In "Stars and Overlapped Time," you will have a chance to take a look at many of Park's research materials that were not included in the resulting video. This lecture performance is to think together about the question as to where we should be heading under the circumstances in which different living conditions are collapsing,


Minha Park's works spring from her continued interest in illusion encountered in society. This ranges from a little personal fantasy like artificial snow discovered in searching for Seoul's snow in LA, a winterless city, to a more macroscopic dimension like US Army in Mojave Desert of Iraq. These illusions usually do not remain just as an image, but accompany performative research about actual places where fantasies are worked out. So 'shooting' is undertaken in the form of a kind of 'adventure,' and the research based on filmed footage is performed into sources of the illusions. Remixing Timespace is also a work that, faced with space fantasy, was to actualize it. A series of further works about space are under way out of this work and related materials.

Ivan Carames Bohigas is a composer and cellist, working with images, movements, movies, and so on. His performances merge different fields, collaborating different artists, of which compositions include live electronic music, poems, acting, spatial dispositions of sound. With a degree in Composition with Honors, he graduated from the Utrecht Conservatorium, The Netherlands, and obtained his MFA diploma as a Performer-Composer in California Institute of the Arts, Los Angeles. His works were shown in various venues like REDCAT in LA and many international film festivals including Cannes Film Festival around the world. He won many awards too.


* The event is conducted mostly in Korean only, but handouts on its gist and timeline will be given for English-speaking audiences to keep up.
* Some of the details are subject to change.
* If you have a query about booking for this program, please contact us at service.leeum@samsung.com or phone 02-2014-6655.